In the Interreg project SEMPRE, charity organisations, trainers and universities gave social services in disadvantaged rural areas of the Baltic Sea region a new role: to empower people in need instead of offering help - this brought happiness and hope to elderly people, migrants, single parents and other vulnerable groups.
The challenge

More people in need in the countryside

Many rural areas in the countries around the Baltic Sea have been losing inhabitants for years. Young and qualified people leave the villages because they find better job opportunities and living conditions in the cities. The ones who have less of a choice remain in the countryside: elderly people, people with disabilities, migrants, single parents. These people are at risk of poverty and durable social exclusion.

Welfare organisations need to learn how to help with less resources

Social service providers could take care of such vulnerable groups, but they, too, suffer from ever smaller budgets and work force. Social services by their nature aim to build stronger communities and to promote equality and opportunity. They are typically provided by welfare and public sector organisations, NGOs or social enterprises. In the changing settings in our rural areas, social service providers need to find new ways of supporting their clients – they need service innovation. And one new approach is empowerment.

Empowering disadvantaged people to help themselves

The SEMPRE project brought together charity organisations with trainers for organisational development and with universities – altogether from eight countries - to test empowerment approaches in the local context and to learn from each other.

The SEMPRE partners set up local empowerment networks of social service providers, public authorities, NGOs and local organisations to test different empowerment tools and methods together, such as the theory of change, future workshops or the social business model canvas. Altogether, there are 13 such networks: in Denmark (Varde and Tønder), Estonia (Võrumaa and Põlvamaa), Finland (Ostrobothnia, Kokkoloa, Pieterssari), Germany (Dithmarschen, Nordfriesland, County of Plön), Latvia (Liepaja and Vidzeme), Lithuania (Pagegiai and Jurbakas), and Sweden (Boden, Luleå and Övertorneå).

One of the tools tested in the local networks are so-called micro projects, i.e. small-scale initiatives at the local level that aim to improve the living situations of members of disadvantaged groups. Within the project lifetime some 35 creative and very diverse micro-projects were initiated and captured in a video and a brochure. And most of them continue in one way or the other. The local empowerment networks helped those who initiated micro project to learn, to explore, and to communicate with stakeholders and service providers, thus stretching their own network contacts and competences.

Five of the micro-projects have already been registered, some as cooperative ("AllDi" – a network of single Parents in Dithmarschen, Germany, and the “Tailor Cooperative” in Luleå, Sweden, which combines work integration of migrants with producing sustainable textiles); one as a social enterprise (the coffee shop "Stop over" in Liepa, Latvia), some as NGOs (the “Afghan Association” in Kokkola, Finland, that promotes social collaboration and "Roku Roka - Hand in Hand" in Latvia which trains assistants to people with disabilities).

Eight micro-projects resulted in new social services taken up by social service providers in their regular service portfolios. For example, in Lithuania, Jurbarkas District Municipality set up a regular family afternoon at which a business plan for the establishment of a multifunctional social service centre was thought up. In Estonia, inhabitants of the small village Harkujärve turned an empty church building into a vibrant community centre with the support of the local church and an NGO. The Municipality of Varde (Denmark) set up a parents’ nights for refugee parents at which the school gets a good insight in what parents with refugee background struggle with in relation to their children’s schooling. Thirteen other new services continue as informal initiatives or under the coordination of an established social service provider after the project.

In the follow-up project SEMPRE ACCELERATORS, additional support mechanisms are going to be applied to accelerate the growth and development of the most promising micro projects developed within SEMPRE and turn them into self-sustaining social start-ups that offer services and/or products on local and regional markets of the Baltic Sea region. Overall, the Interreg project SEMPRE used EUR 3.83 million of support form the European Union wisely to let a smart idea, i.e. empowerment in social services, become common practice in numerous charity organisations in rural areas of the Baltic Sea region. 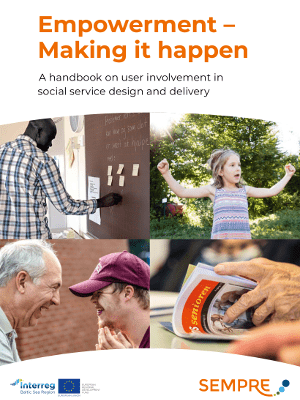 This Guidebook for Empowerment Training is about building the empowerment competence of social service providers and covers different countries and contexts. It contains knowledge and experiences gained during practical pilots in countries around the Baltic Sea as well as numerous tips and guidance how to practice empowerment through action learning. The document provides concrete recommendations and tools to develop training modules that will lead to a change, development or improvement in the practice of social service delivery.
View outputCopy direct link to this output 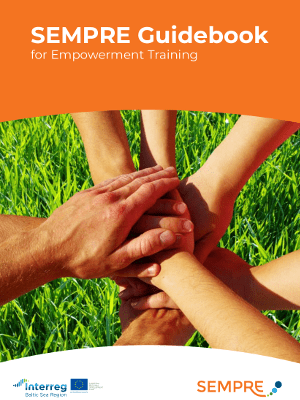 This Organisational Roadmap is meant to inspire and guide leaders of social service providers – public, private or third sector actors – to rethink their role in the social economy and to strengthen the involvement of service end-users in the work of their organisations. In the focus of the roadmap are co-creation principles in service development and design.
View outputCopy direct link to this output 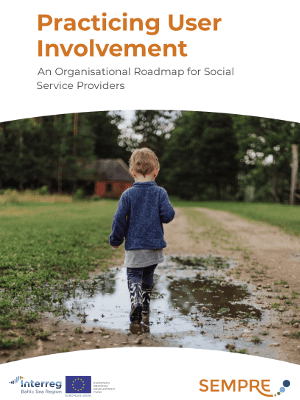 The 26 micro projects presented in this brochure serve as an inspiration for social service providers, public authorities, NGOs and service user groups who are looking for modern ways to provide social services. In each micro-project, the service users were involved in the design and implementation of new social services that respond to the needs of disadvantaged people living in rural areas. This brochure illustrates how empowerment tools can be successfully used to initiate co-creation processes.
View outputCopy direct link to this output 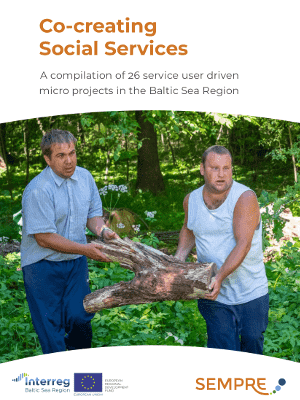 The Foundation for Lifelong Learning PERITIA