The Interreg project DiveSMART-Baltic mapped competences of divers in nine countries around the Baltic Sea, and equipped rescue centres, rescue services and other involved services with operational procedures that harmonise and accelerate joint search and rescue missions in an underwater environment in order to save more human lives.
The challenge

The accident of Costa Concordia in Italy from 2012 was an alarming lesson for the rescue services in Sweden, Finland and Poland. Considering the dense shipping traffic in the Baltic Sea with about 2,000 operating in the Baltic Sea at any given minute throughout the year, colliding windfarms and other underwater architecture, accidents in the Baltic Sea can take place, too. However, there is neither an overview of divers’ competences available, nor common procedures in place for countries around the Baltic Sea to support search and rescue missions in underwater environment. A lack of coordination on the national and international levels inevitably leads to gaps in the emergency preparedness, meaning a longer response time and fewer lives saved as the consequence.

The first in the Baltic Sea region online database created by DiveSMART-Baltic compiles human diving resources and competences as well as diving equipment in Denmark, Estonia, Finland, Germany, Latvia, Lithuania, Norway, Poland and Sweden. Thanks to this database currently managed by the Swedish Coast Guard, rescue services and authorities in countries around the Baltic Sea can validate the available resources, and better plan search and rescue missions in an underwater environment where local resources are not sufficient.

This exercise enabled to test the newly developed Standard Operational Procedures all the way from alarming, mobilisation to life-rescuing diving. They clarify and harmonise how Rescue Coordination Centres, rescue services, coast guards, fire departments, police and armed forces around the Baltic Sea should cooperate in case of an accident to reduce the reaction time to accidents. Guidelines for dive coordinator officers are already in use by the Maritime Rescue Coordination Centre in Helsinki, Finland and the Joint Rescue Coordination Centre RCC in Tallinn, Estonia.

The procedures also serve as a baseline for a long-term exercise plan developed by the project, which include the exercises in May 2019 in Stockholm, Sweden, and in September 2020 in Gdynia, Poland.

The project results are now in use in the project platform ResQU2, which further develops the expertise of national authorities and rescue services in countries around the Baltic Sea to cope with accidents in the Baltic Sea and in ports, including those involving hazardous substances. 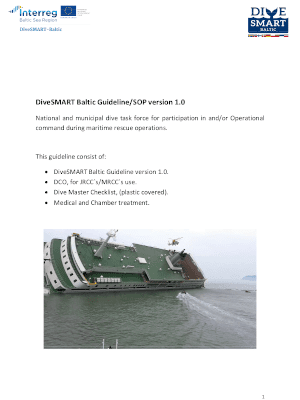 The inventory of human resources and diving equipment

The Jira tool is an online inventory of all the diving resources, capacities, mobilisation times and alarming procedures from the EU countries around the Baltic Sea. It includes information about more than 1,500 divers ready to be deployed in the case of an emergency, and suggested lists of equipment that each country should bare as an emergency preparedness procedure. The database enables Rescue Coordination Centres (RCC) in Denmark, Sweden, Finland, Latvia, Poland and Norway, diving organisations and the local and regional authorities to better prepare for and coordinate activities in case of accidents in the Baltic Sea.
View outputCopy direct link to this output 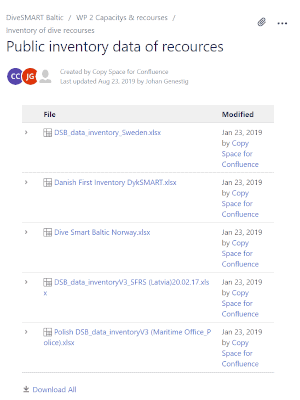