In the Interreg project Baltic Slurry Acidification, farmers around the Baltic Sea tested the technology of treating animal manure with acid to reduce ammonia emissions harmful to people and the environment, and to gain valuable fertilisers for their crops instead.
The challenge

Not only do ammonia emissions threaten the waters of the Baltic Sea but also harm people’s health through the formation of secondary particulate matter, which is among the pollutants with the highest estimated impact on human health.

From waste to profit

In their work, farmers around the Baltic Sea region dispose tonnes of manure produced by their animals, which - if not dealt with properly - emit large amounts of ammonia. Additionally, farmers have to spend money to buy fertilisers for their crops.

In Denmark, farmers from 70 farms treat existing manure with acid, which reduces ammonia from evaporation from animal slurry into the atmosphere and reduce nitrogen loss. When the pH of the manure is lowered, emissions decrease and nitrogen is stabilised into a plant-available form. Moreover, the treated slurry can effectively be used as a fertiliser on the same farm without the need to purchase mineral nitrogen and sulphur fertilisers. The technology proved to be successful in Denmark; however, it is not widely spread, providing a chance for the project Baltic Slurry Acidification to make the Danish example common practice around the Baltic Sea.

For over a decade, Danish farmers have successfully been treating animal manure with acid to reduce ammonia emissions but this practice was not widespread in the Baltic Sea region. Now for the first time, six commercial farms, experimental farms and agricultural contractors tested slurry acidification techniques (SATs) in Estonia, Germany, Latvia, Lithuania, Poland and Sweden. They tested the change in ammonia, the effect of using the treated slurry as fertiliser, and the running costs.

Farmers from each test site teamed up with at least one other organisation to get assistance in buying and setting up the slurry acidification tankers as well as in running the tests. For example, the Swedish RISE Research Institute, Latvian Rural Advisory and Training Centre and Danish Organe Institute supported SAT investments at the test sites of the Estonian Crop Research Institute, Polish Institute of Technology and Life Sciences and the Latvian private farm Lauku Agro.

After 70 acidification processes and around 35,000 tonnes tons of slurry acidified, farmers from four out of six farms concluded to further use acidification techniques. Most of them did not notice any negative influence on the machinery nor the soil’s pH. The field trials proved that slurry acidification decreases ammonia emissions by 49–64%, and mineral nitrogen kept in slurry as a fertiliser allows for savings within the range of 0.77–2.10 € for each cubic meter of slurry.

The farmers shared this new knowledge with other farmers and agricultural advisors who visited test sites to learn more about the equipment and the field trials. The Swedish farm Br Göransson together with the Rural Economy and Agricultural Society exhibited the SAT equipment at the Swedish Borgeby Agricultural Expo and three conferences for milk and meat producers, reaching over 20,000 people in the industry.

Thanks to the support from the Polish Institute of Technology and Life Sciences in assessing the market potential, the Polish enterprises Pomot, Agroserwis and Lukomet became distributors of SATs in Poland. The Danish company Ørum Smeden has enough knowledge now on how to enter the Polish agricultural market with their products.

The Estonian Crop Research Institute helped Eesti Agritehnika become a distributor of SATs in Estonia, whereas another company Väätsa Agro AS learned from the project how to best apply slurry acidification into their current manure and fertiliser management.

The RISE Research Institute of Sweden worked closely with a Swedish consulting company Lifsung AB to integrate them into the existing Swedish manure handling systems and build their capacity for advising their clients on acidification techniques.

The Interreg project Baltic Slurry Acidification used EUR 3.99 million from the European Union to turn a proven Danish solution into common practice in the region. Now, farmers around the Baltic Sea have more options at hand how to treat animal manure, reduce harmful ammonia emissions and fertilise their crops at the same time.

Spreading the project recommendations and results further is continued in the framework of the Interreg Baltic Sea Region project platform SuMaNu. The platform combines expertise from several projects to more efficiently manage manure and reduce the negative impact of farming on the Baltic Sea.

Pilots SATs, procurement installation and commissioning in countries in the Baltic Sea Region 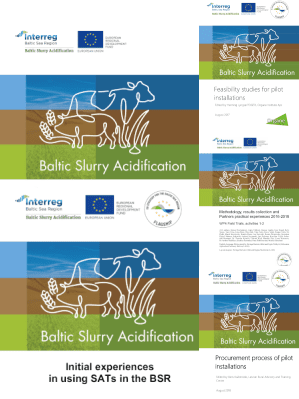 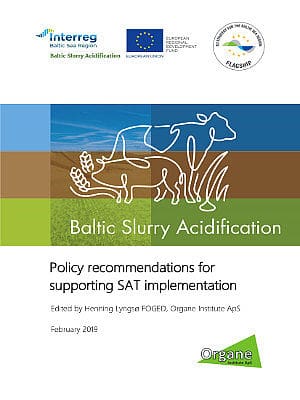 Institute of Technology and Life Sciences

The Rural Economy and Agricultural Society