Next steps taken to develop the future Programme

More than 40 representatives of the EU Member States, neighbouring partner countries, European Commission and the Managing Authority/Joint Secretariat convened online at the Joint Programming Committee Task Force meeting last week. Together they examined to-date developments in the programming of the future Interreg Baltic Sea Region, and agreed on subsequent steps.

The Joint Programming Committee Task Force (JPC TF) meeting was chaired by Iruma Kravale from the Ministry of Environmental Protection and Regional Development in Latvia. First, Pekka Jounila from the European Commission shared information on the development of the legislative package. Among other things, he indicated that the adoption of the Multiannual Financial Framework, and as a consequence a budget for the future Interreg Baltic Sea Region Programme, should rather be expected in 2021.

First impressions of the public consultation

Ramboll is the consultancy agency that ran the public consultation on the thematic framework of the future Programme on behalf of the Joint Programming Committee and MA/JS. The agency presented first statistics on the participation in the public consultation with a high number of 719 comments collected from 13 July to 4 September 2020. Although the highest number of responds came from Poland (21%), Germany (19%) and Finland (14%), in fact citizens of all countries around the Baltic Sea actively joined in the consultation.

All the seven topics proposed as the thematic framework for the future Programme were seen as relevant by the participants. Three topics attracted the highest attention and were most frequently commented on: More innovative and resilient societies; Green and intelligent transport and mobility; and Circular economy  (Click here to view the full draft thematic framework that was examined in the public consultation). 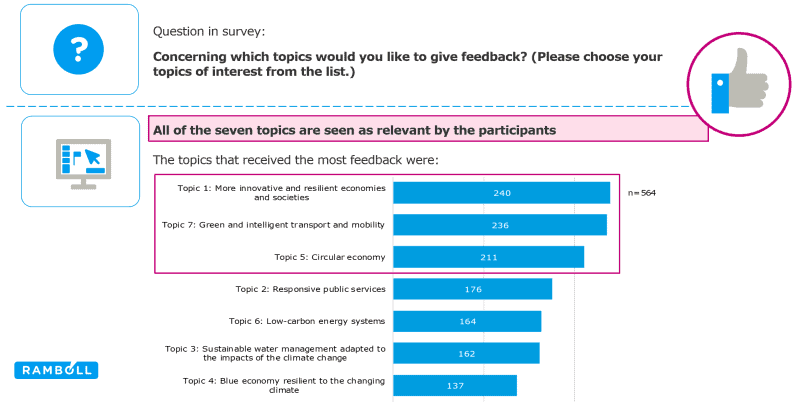 The public consultation is complimented by results from the targeted consultation with the policy area coordinators (PACs) of the EU Strategy for the Baltic Sea Region as well as the project platforms. PACs and project platform representatives found all proposed topics relevant as well. Many project ideas are already in the pipeline.

All 719 valuable comments collected in the public consultation as well as results of the targeted consultation are currently under thorough screening and aggregating that is performed together by the MA/JS staff and the agency. The results will enable to adjust the current thematic framework to the needs and expectations of the citizens around the Baltic Sea better.

Next steps in the programming

Further topics discussed at the meeting were the future indicators, next steps to agree on possible small projects, simplified cost options and next steps towards future management, audit and control system. MA/JS collected feedback to its proposals and will work on these topics further accordingly.

The next meeting of the Joint Programming Committee Task Force is planned for 29-30 October 2020. At that meeting, among other things, the thematic framework of the future Programme revised based on the outcomes of the consultations will be discussed. The aim is to agree on the future Programme priorities.

The members of the JPC TF also used the chance to exchange with the National Coordinators of the EU Strategy of the Baltic Sea Region (EUSBSR). The meeting was held back-to-back with the main session of the JPC TF.

Pekka Jounila from the European Commission’s side updated on the status of the approval of the EUSBSR Action Plan. Simon Stermann, the chair of the EUSBSR National Coordinators’ Group, presented proposals on how the Programme should support the EUSBSR governance in the future, including the EUSBSR Strategy Point. The discussion that followed allowed for additional clarifications of expectations, needs and possibilities of both the members of the Joint Programming Committee Task Force and National Coordinators of the Strategy.