There’s a story behind every project: a story of people from countries around the Baltic Sea who team up to exchange good practices or find a new way to tackle a joint challenge – together. In Interreg Baltic Sea Region, there are 140 such stories. And for the Managing Authority/Joint Secretariat staff, it is very rewarding to assist project partners from the moment their project idea starts to sprout to harvesting the achievements. Like in the case of the project cities.multimodal.

My first encounter with cities.multimodal …

Stefanie Maack: My first encounter with cities.multimodal took place in Rostock at the lead applicant seminar that we organised once we had approved 37 fresh projects. Project managers came to Rostock from ten countries, and we asked each of them to briefly present themselves. One person became ingrained in my mind because of what he said: “My name is Steffen Nozon, and I am probably the only person in the room today who came to the event by bike.” Steffen Nozon is the mobility manager of the City of Rostock. He was the driving force behind the project application for cities.multimodal, and he is a living example of environmentally friendly mobility in cities. 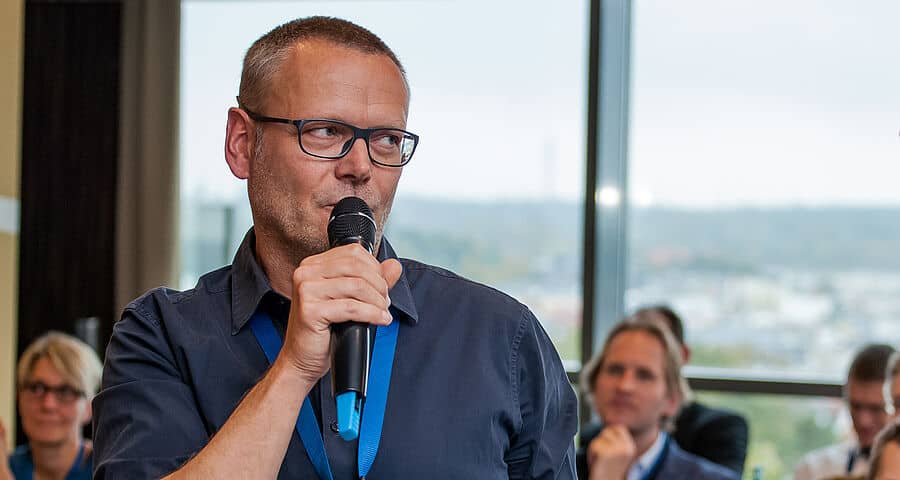 Steffen Nozon, mobility manager of the city of Rostock at the Lead Partner Seminar in Rostock in 2017 (©IB.SH/Luptscho)

A few months later, I was able to participate in the project’s first meeting in the city hall of Rostock: a cozy, low-lit room under the roof with sloping ceilings framed by old, dark wood. A group of some fourty professionals gathered there. A true spirit of kicking something off was in the air as the mobility experts shared their plans and previous experience in making mobility in cities greener.

Just before the joint dinner, I caught the then mobility manager of the City of Gdansk, Monika Evini, for an interview. She explained to me what this project, the slightly cryptic “cities.multimodal” was really about: “In cities.multimodal, we want to try out modern ways of making people move around their cities with less CO2 emissions – namely, to drive less.” It involves offering different modes of sustainable transport and mobility for citizens. “Mobility management,” she added, “means to use soft measures that accompany the hard investment measures. We need soft measures to make people change their behaviour.”

In Gdansk, she explained, it was not enough to build bike lanes. They needed to convince people to use the bike lane: to leave their cars in the garage, get on their bikes and ride through town instead of driving. “We have already motivated a lot of parents and school children with a “safe cycling campaign” and now in cities.multimodal we want to go a step further and address citizens on a broader scale.” 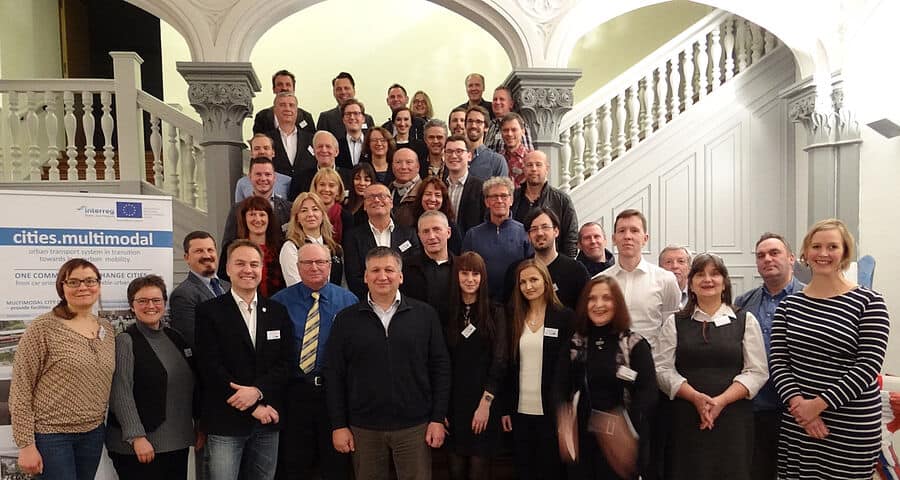 A few months later, I meet the project manager, Lisa Wiechmann, for the first time. It’s a sunny Saturday in September. A large street in the city centre of Rostock is crowded with many people promoting carsharing, locally produced  organic vegetables and second-hand clothes. It is the annual climate action day, Rostock’s version of the global Parking Day initiative. Lisa is out in the street inviting citizens to test different types of cargo bikes: one bike with two wheels, one with three, one with electric support and another one without. “We want to find out which of these cargo bikes is the easiest to use for people who have never tried a cargo bike before,“ Lisa explains to me. “We are finalising our plans to set up ‘mobility points’ in Rostock where people can borrow these cargo bikes, for example to do their shopping without a car – this is one of our pilot activities in cities.multimodal,” she adds. As a Rostock resident, I’m thrilled by this plan, because my own family loves biking but is frequently overburdened with taking home bigger amounts of shopping on bikes.

Living streets raise awareness about what could be different

A year passes before I get to talk to Lisa again. Meanwhile, Greta Thunberg has initiated the greatest climate protests we have ever seen, the European elections have taken place with a tremendous increase for the green parties of Europe, and Ursula von der Leyen has proclaimed the European Green Deal. I have been asked to provide an idea for an Interreg project that can be portrayed in a podcast. The producers want a project that they can visit, where something visible and audible is happening on the ground – and that showcases how Interreg contributes to a greener Europe. In my mind, I hear a bike bell and the rumbling sound of a loaded cargo bike rolling down a curb. I contact Lisa, and she is all up for it.

In February 2020, I meet Lisa at Rostock’s train station. We welcome two British radio journalists and take a well prepared bike tour around Rostock to visit the sites where cities.multimodal is getting active – she’s riding a cargo bike, of course. Lisa takes us to numerous locations where green mobility is happening in Rostock. She takes us to a town square and shows us the plans based on which mobility spots will be set up in just a month’s time. And she has arranged for us to meet some locals Lisa is working with on a ‘living street concept’. They learned about the concept from the pioneer city in living streets: the Belgian city of Ghent. It works like this: The city closes down a street to traffic for some weeks or months. The local shop owners, residents, and creatives people can use and design the newly freed space to better serve the community’s well-being: Sofas to hang out, raised soil beds for urban gardening, an outdoor repair cafe or even a temporary playground. The city of Rostock is planning a living street for early summer. 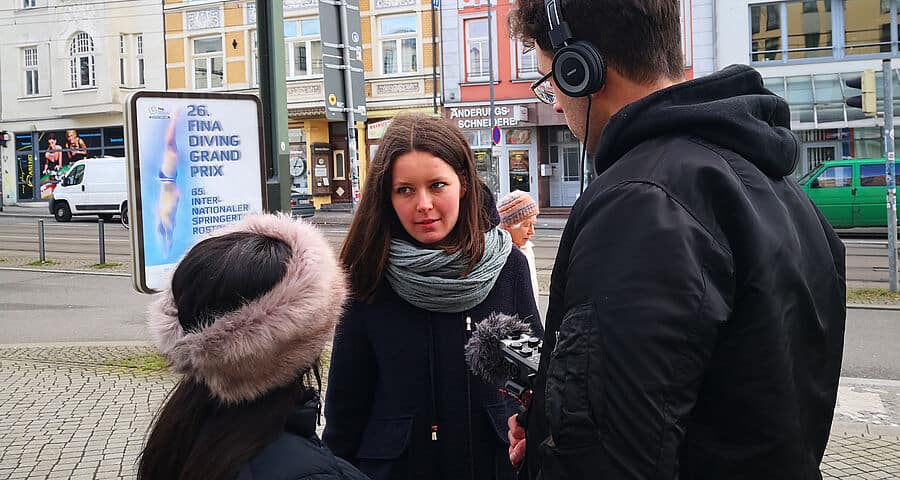 Lisa Wiechmann explains the future mobility hub in Rostock to British radio journalists to be covered in the podcast “This is Europe” (©IB.SH/Maack)

Project keeps on going in a new normal

However, three weeks later, the German government announces a lockdown due to the COVID-19 pandemic. Almost all countries around the Baltic Sea do the same. In the blink of an eye, life is turned upside down for people in Rostock, in Gdansk and everywhere else in Europe, and public gatherings turn into a no-go for many months. Still, three mobility hubs are constructed just while everyone is trying to avoid public transport or even leaving the house. To me it is a positive signal during very gloomy times: maybe biking will play a bigger role as the new normal? Several times a week, I walk by one of the mobility hubs on my way to the market. Every time, the cargo bike is in use. From what I can see, the cargo bike pilot of cities.multimodal seems to work. 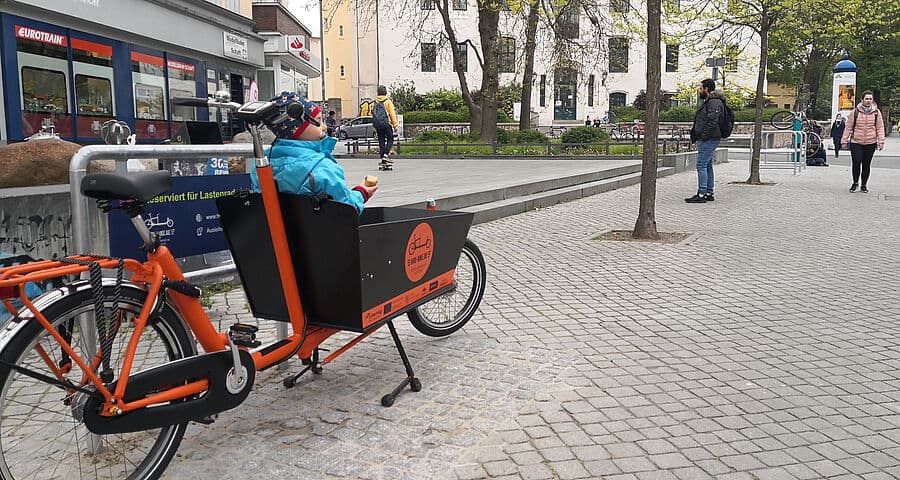 The cargo bike at one of three new mobility hubs in Rostock can be used by citizens free of charge (©IB.SH/Maack)

Only in December, I see Lisa again. But this time she does not see me. I am participating in the webinar “Co-creating urban space – Testing the Living Street concept in the Baltic Sea Region”, organised by the project´s communication partner, the Union of the Baltic Cities Sustainable Cities Commission in Turku.

At the webinar, Lisa and partners from Poland and Estonia share their experience with the living streets they implemented. “In Tartu, the Interreg project cities.multimodal enabled us to run a very successful living street this summer in the city centre which attracted thousands of citizens,” says Kaspar Alev from the City of Tartu, “and we already have plans to continue such living streets after the project ends.” 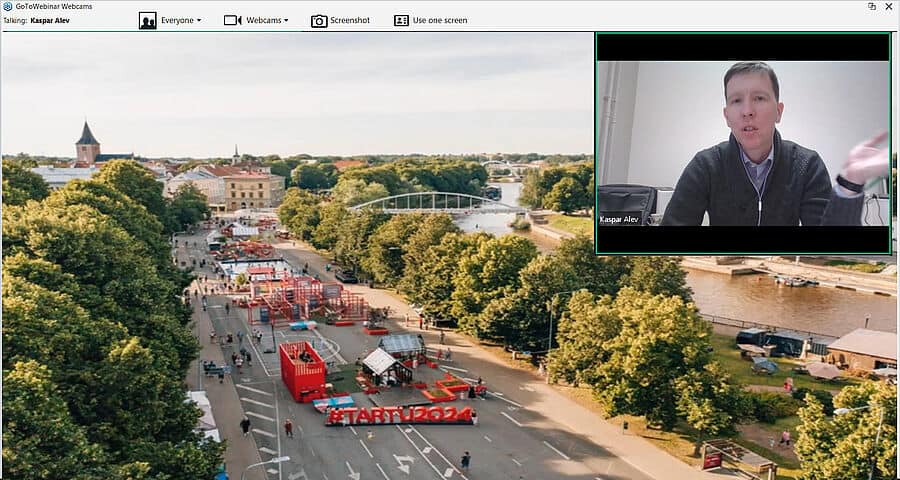 Kaspar Alev of the City of Tartu shares experience with a living street in a webinar organised by the UBC Sustainbale Cities Commission in late 2020.

The projects’ evaluator, Michael Abraham from the Technical University of Berlin, highlights that the upcoming year is a great chance for more living streets: “In 2021, because of the pandemic, people are craving city life outdoors. That’s why you can reach many people with living streets like the ones we established in the Interreg project cities.multimodal. And this means a lot of potential for convincing residents that they can help create more liveable spaces by driving less.”

Working for the Programme, I know that the project ends in April 2021, too early for more living streets organised by the project. But from the enthusiasm and positive experience I have seen in this webinar and whenever I spoke to one of the mobility experts in cities.multimodal, I am positive that the learnings from this project will bear fruit for a long time to come, that more living streets will take place and that people in these cities will be encouraged to use their cars less. That’s why to me, cities.multimodal is a good example of how Interreg helps deliver the European Green Deal, one project at a time.