The Interreg project BSUIN tackled underutilisation of the underground laboratories serving as a business development and innovation platform for representatives of business, academia and regional development agencies across the Baltic Sea region.
The challenge

Several underground laboratories (ULs) in the Baltic Sea region remained under-utilised for many years, without taking advantage of the innovation and business potential. Unique scientific environment of these facilities was not fully exploited. Furthermore, the laboratories were operating separately, lacking specific standards for characterizing the ULs technically or in terms of quality of operations. The existing laboratories offered services primarily on a national level and targeted mostly scientific users, as they were initiated by nearby universities to support pure scientific research. Consequently, the provision of services to commercial users was not part of their initial concept. Opening up for businesses and transnational collaboration would therefore facilitate scientific technology transfer and exchange of best practices.

In the context of individual underground laboratories, the activities at Callio Lab (Finland) are extending into mining and tunnelling training, while the KGHM Cuprum is planning to upgrade its conceptual laboratory design. Next, the recent establishment of the GFZ Seismic 3D laboratory at the Freiberg´s Reiche Zeche mine is a proof of the right direction that BSUIN project has taken.

The partnership succeeded in the development of an open-access platform that serves as a place for the laboratories to market their services and facilities as well as share relevant information. The open innovation platform hosts the information, reports guidelines, underground laboratory business models, and service designs of the BSUIN project. It also contains site characterisation information which makes it easier for the users to identify and accommodate the most appropriate facilities in view of their needs.

The successful collaboration of the partnership resulted in the establishment of the European Underground Laboratories association (EUL). In November 2020 seven BSUIN partner organizations and two associated organizations founded the new association. It is open to individual companies, research centers and universities on regional, national and international levels.
The EUL association coordinates the open-access platform, collaborates with the BSUIN project partners, and actively seeks for new members.

The BSUIN project laid grounds for the new extension phase project EUL “Empowering Underground Laboratories Network Usage” which continues joint efforts in testing, evaluating, and improving the innovation platform. In addition, BSUIN generated a spin-off project which focuses on well-being with intelligent lighting in an underground mine. This is a joint effort between architecture (UO), medicine (UO), and industrial partners from the mining and illumination industries. The next spin-off to mention is the project NEMESIS which was initiated as a Proof of Concept study on a hypothesis: Does cosmic radiation produce particle cascades in radiation shielding materials?

The Interreg project BSUIN used EUR 3 million from the European Union to increase visibility and functionality of the earlier under-exploited underground laboratories as places for transnational exchange on scientific developments as well as business ideas and incubation.

The European Underground Laboratories Association (EUL) is established under German law (Freiberg/Dresden) and its founding members are seven regular partners and two associated organisations of the BSUIN project. EUL association is a registered non-profit organization that promotes science, research, technical development, innovation, education and events. The concept of BSUIN network accommodates the interests of BSUIN organisations and other stakeholders such as facility providers, managers and utilisers. The better use and development of the underground laboratories is a common denominator for the people behind this network.
View outputCopy direct link to this output 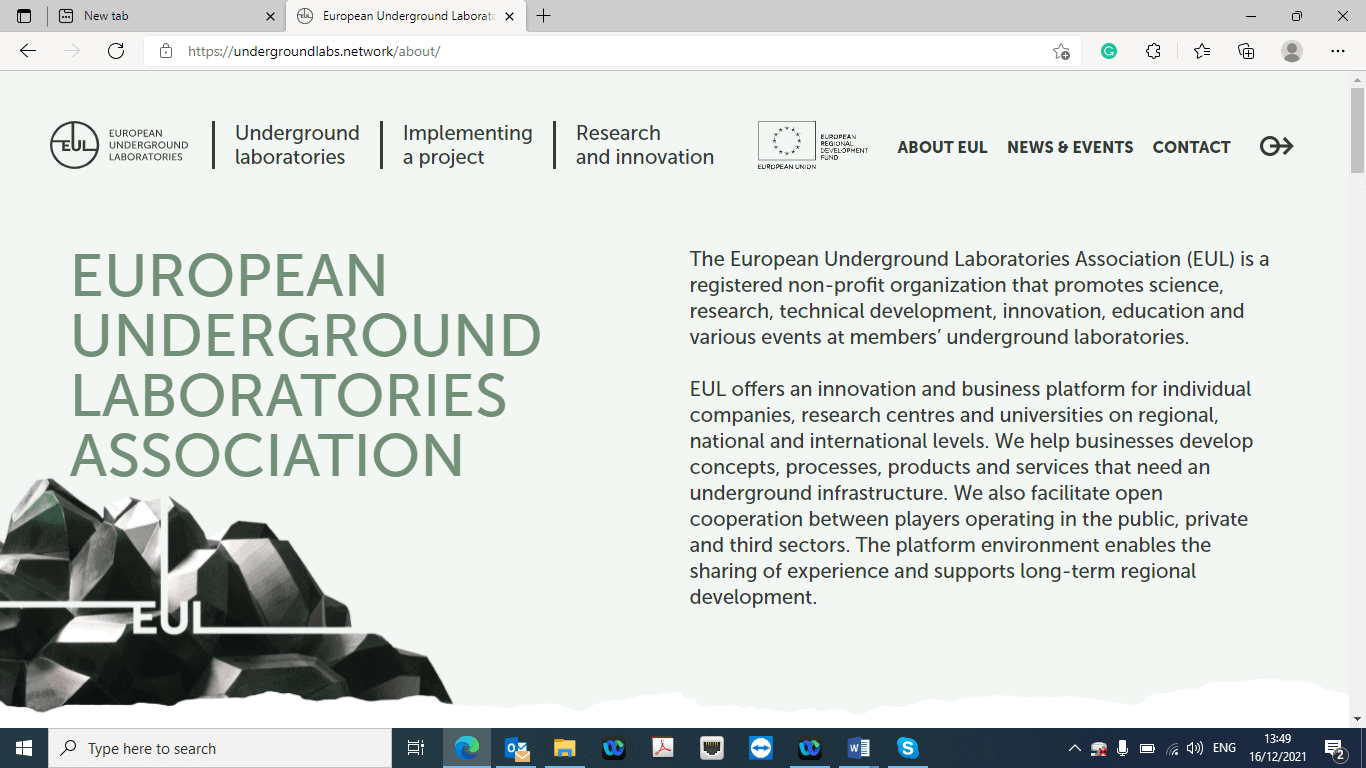 The open innovation platform supports the operation of the European Underground Laboratories Association (EUL). The platform hosts the information, reports guidelines, underground laboratory business models and service designs of the BSUIN project. The underground laboratories (UL) site characterisation information helps the potential users of the laboratories to find optimal facilities for their purposes. It helps the UL operators and managers in further developing their characterisation data to reach the common standard level. The innovation and service design information of the ULs helps the users in finding the best innovation support for their activities.
View outputCopy direct link to this output 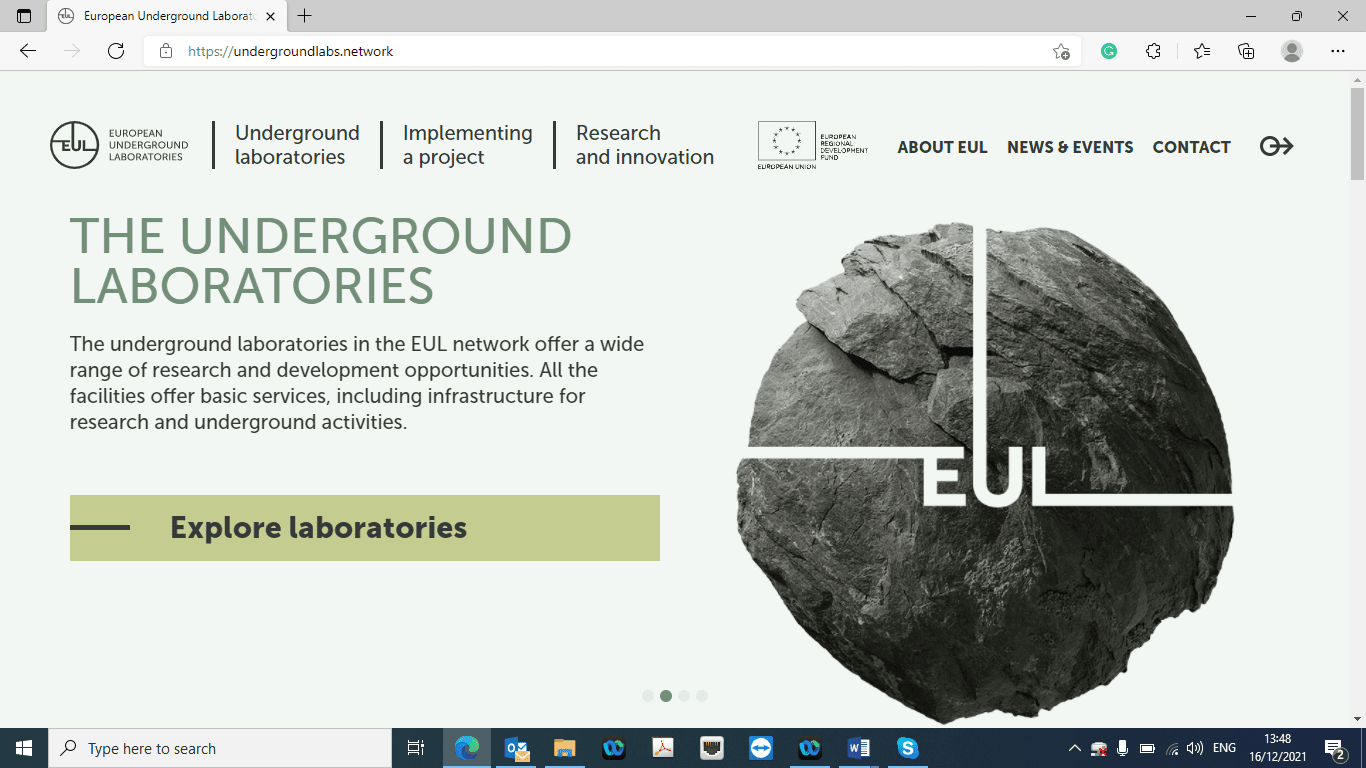