Turning our societies from fossil fuels to renewable energies brings numerous changes in our landscapes: solar panels along highways, large rapeseed fields, wind turbines’ red lights blinking throughout the night. When designating areas for renewable energy production, it is the planning authorities’ task to designate areas in which investors can actually build energy infrastructure without conflicts. However, often there are people who do not approve of renewable energy projects. During the planning process, the planners involve local residents and discuss the effects. For this involvement, planners need evidence of the actual effects to be expected. To this end, the Energy Agency of southwestern Sweden examined the effects of a wind power project on the local job market of one of its municipalities in Blekinge county as part of the BEA-APP project.

A study of local jobs in wind power project

The expansion of offshore wind power not only provides locally produced renewable energy in Sölveborg, a municipality of some 10,000 inhabitants in the Blekinge region in southern Sweden. Offshore wind power also creates opportunities for new local jobs, a study by the Energy Agency of Southeast Sweden shows. The report calculates that if an estimated 8% of the job opportunities resulting from the project benefit the local business sector in Blekinge, this amounts to 338 new jobs: 278 annual jobs during the expansion of the wind farm and 60 annual jobs during the construction and operating phase. Of those 60 annual jobs, 30 jobs are direct employment as service technicians for operation and maintenance at the wind park, and 30 jobs are services from local suppliers. 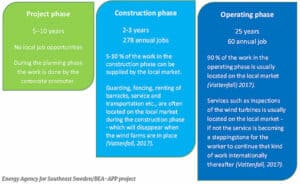 Types of jobs during different phases of setting up an offshore wind farm (Energy Agency for Southeast Sweden, BEA-APP project).

Blekinge on its way to a low-carbon society

Blekinge municipalities work in a variety of ways to reduce climate impact, for example by reducing energy consumption through energy efficiency and switching to fossil-free energy consumption in different sectors. One way to do this is to take advantage of the potential that exists in each municipality. Blekinge has unique opportunities for energy extraction, for example from the sun and wind. There are 24 land-based wind farms in Sölvesborg today, but no sea-based ones yet; they are still in the planning stage. The area beyond the Blekinge coast has good wind conditions and is suitable for wind power. The municipality of Sölvesborg, which would be directly affected by a wind power establishment, is interested in information on the different development scenarios and how these would affect their municipality. The Energy Agency of Southeast Sweden has compiled a socio-economic report on sea-based wind power as a part of the project BEA-APP and turned it over to the municipality.

The report highlights the socio-economic impacts wind power development could have on the region if the proposed wind farm “Taggen” were built. It further highlights the opportunities that the regional and local business community has in connection with a wind power development of “Taggen”, and the importance of an active business community when major contracts are drafted. The report also describes methods that the municipality and other actors may use in order to attract and maximise the potential of the proposed wind farm. It highlights the importance of renewable energy production to Blekinge in the future in efforts to reach both regional and national climate targets.

“This study is not only useful to promote the “Taggen” wind park, but it is also used in international studies that we are carrying out in the project BEA-APP,” says Gabriele Hoffmann, who is coordinating the project for the Ministry of Energy, Infrastructure and Digitalization of Mecklenburg-Vorpommern (Germany). In BEA-APP – or “Baltic Energy Areas – a planning perspective” – eleven project partners from eight countries around the Baltic Sea bring together spatial planning and regional energy policy to support the transition towards low-carbon energy systems.

The study feeds into the work on value chains of renewable energy projects coordinated by the Estonian Energy Agency. It provides specific figures on the number of jobs created for a wind power project of a certain size which will be used to calculate the actual values generated by wind power projects. The Baltic Environmental Forum of Latvia is currently working on how to effectively involve local stakeholders in planning projects and can analyse the case of “Taggen” and the effect on stakeholders’ perceptions. Ultimately, the BEA-APP partners develop innovative ways to involve local stakeholders to overcome existing difficulties with local opposition to energy projects.

The Ministry of Energy, Transport and digital Infrastructure of Mecklenburg-Vorpommern together with Roskilde University (Denmark) look into different conflicts during the planning processes of wind parks and other renewable energy planning processes. The case of the “Taggen” wind park will be examined: What is the process required by Swedish national law? Are stakeholders involved? When and how? Are there any conflicts between planners and citizens during the planning process? How are conflicts avoided or successfully handled? Is the study on local jobs important to avoid or handle a conflict? Ultimately, BEA-APP works to develop harmonised planning criteria for renewable energy across the Baltic Sea region, which is why it is a flagship project of the EU Strategy for the Baltic Sea Region. Gabriele Hoffmann emphasises: “Today, we are as a matter of fact already using the same energy infrastructure across the Baltic Sea region – it is about time to align our energy planning approaches as well.”

This article is based on a text by Annica C. Lindh and Johanna Wallinn (Energy Agency for Southeast Sweden) and an interview with Gabriele Hoffmann (Ministry of Energy, Infrastructure and Digitalization of Mecklenburg-Vorpommern).