Fight against contamination: Hazard in Hamburg

An inland waterway vessel collides with a tanker causing an oil leek and release of huge quantities of sulfur dioxide into the atmosphere. Apart from the crews, 75 people working at the nearby refinery get affected and flee the area leaving an open radioactive source behind. Contamination as a possible danger in seaports was picked up by the HAZARD project to exercise procedures, communication, and cooperation among rescue services, local authorities and private companies.

About 500 people from Estonia, Finland, Germany, Lithuania and Sweden gathered in Hamburg, Germany, on 13 May to train a coordinated rescue action and decontamination. The exercise was organised by the Fire and Rescue Service Hamburg along with its voluntary fire department, Hamburg Ministry of Environment and Energy, Hamburg Police Department, ASKLEPIOS Clinic Harburg and the University Hospital Eppendorf.

A coordinated evacuation of people and decontamination from hazardous substances were the highlights of the exercise. Once the affected people were moved to a secure area, the decontamination process started. First, the people were asked to take a cold shower, then the measuring took place to indicate if and how much of toxic substance was left. If necessary, a warm shower helped them achieve the “clean” status. The whole procedure would be repeated if the measuring results were unsatisfactory. Only when cleaned off any toxic substances, the victims would be transported to hospital for a medical check-up.

Accidents in seaports often involve hazardous substances and may affect people in more than one country. In such cases, active cooperation among rescue services, local authorities and involved private companies in the countries around the Baltic Sea is required. The Hamburg exercise helped identify some differences in the national rescue frameworks, the example of which were incompatible communication systems. Moreover, such common training events prove to facilitate the exchange of experiences and smooth conduct of a joint rescue mission. 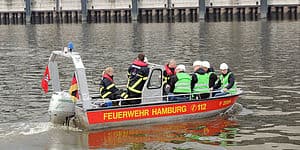 “A good thing about such exercises is that we practice common ways to operate in the case of large-scale rescue missions. We learn from each other, we take what is good and implement it into our national systems. All countries, especially with less advanced rescue systems in place, profit from the process a lot,” says Miikka Toivonen from SW Finland Emergency Services.

Apart from training human decontamination procedures, the exercise included the development and limited application of procedures dealing with the environmental damage after the contamination.

HAZARD is one of three complementary Interreg Baltic Sea Region projects that deal with emergencies: HAZARD takes up the issue of safety and emergency situations in seaports, ChemSAR copes with search and rescue missions on the sea, whereas DiveSmart Baltic focuses on training divers across the Baltic Sea countries who conduct rescue missions. All three projects have a flagship status of the EU Strategy for the Baltic Sea Region, proving their impact upon the whole region.

18 Jan 2017
Coping with emergencies at seaports