Developing a new cooperation programme like Interreg Baltic Sea Region is a multilayered process of defining needs, opportunities and smartest ways of how to best shape the region with the EU funding. Jens Kurnol from the German Federal Institute for Research on Building, Urban Affairs and Spatial Development, the current Chair of the Monitoring Committee, provides an insight into the upcoming programming process and challenges involved.

Who is involved in the discussions on shaping the future programme, the successor of Interreg Baltic Sea Region?

Jens Kurnol, German Federal Institute for Research on Building, Urban Affairs and Spatial Development: Putting it formally, partner countries nominate delegates to jointly shape the future programme. These are representatives from national and regional administrations from all ten countries around the Baltic Sea. As each country can nominate up to three people, we will bring about 30 people together into the Joint Planning Committee to exchange ideas and their national requirements. 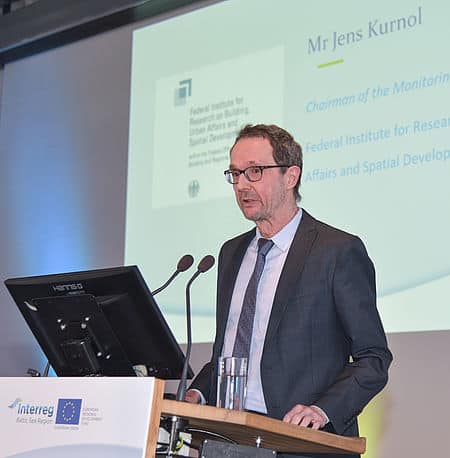 All countries also run their national sub-committees, whose members act as multipliers in fact. Discussions held at national level feed into discussions on a transnational level, and the other way round. All delegates will collect information on the needs and expectations existing in the Baltic Sea region, by involving stakeholders in their countries, regions and communities.

Then, the European Commission has an observer status. Its representative updates us on the developments in Brussels and discussions at the European Parliament. The Commission also gives their view on thematic priorities of the programme, e.g. through the so-called orientation paper. The chair of the National Coordinators of the EU Strategy for the Baltic Sea region also participates in the meetings.

Following that, the Joint Programming Committee decides about an overall strategy for the programme, including the types of results we would like to achieve. The Joint Secretariat holds an assisting role in the process. It works on putting the ideas of Member States into practice.

The overall process is stretched over time and includes several feedback rounds with stakeholders. In May 2018, we received first ideas for the years 2021-2027. With the European elections back in May 2019 and debates related to Brexit, the discussions on the new regulation are still ongoing.

The meeting of the Task Force in September 2019 was an important milestone in the process. We will start programming officially in the beginning of the next year. We hope that the discussions between the European Parliament, European Council and the European Commission will be advanced enough so that we could start talking about the topics to address with the future programme. We expect to have that clarity before summer.

The good thing about the Baltic Sea region is that we have had a lot of cooperation going on for years. We do know the needs of the regions: clear waters and good quality of life in all places. We are aware that tourism, for instance, is a very important topic for blue growth. In that sense, we have a good starting point. During the meetings of the Joint Programming Committee in February and June, we will work on a common denominator for what we will do within the future programme.

What will be the most challenging the process?

From the point of view of a programme developer, the most challenging is to get all the different stakeholders on board: ten partner countries along with their national, regional, local and other stakeholders, the European Commission, Coordinators of the EU Strategy for the Baltic Sea Region, NGO, you name it. It takes a lot of time to consult and agree.

And from the point of view of a project developer, it is the bureaucracy that we create when it comes to spending the taxpayer’s money. There is always room for improvement to reduce that burden. This is something we promise to ourselves and to applicants every seven years and I sincerely hope that we will achieve more this time.

Interview with Jens Kurnol was taken by Anna Galyga (Managing Authority/Joint Secretariat) during the 11th Monitoring Committee meeting, which was held in Potsdam on 25-26 September 2019.