What are important results and experiences within the project?

The implementation of meshed offshore grids in the Baltic Sea is very complex. However, the construction of such grids is from a purely technical point of view possible. A much greater challenge than the technical implementation is the adaptation or creation of a suitable regulatory framework for a meshed offshore grid. For us, this is a central finding of the project. At the moment, there are only a few approaches and ideas how such an offshore grid could be regulated and operated. In the Baltic InteGrid project we have almost racked our brains on this question. We have released a number of publications on this and other topics during the course of the project. The summary and many individual reports can be found on the website of the Baltic Offshore Grid Forum (BOGF) website: Baltic InteGrid Outputs.

Unfortunately, apart from the regulatory challenges, we do not (yet) have a strong commitment of the Baltic Sea states to accelerate and coordinate the expansion of offshore wind energy in the Baltic Sea. This commitment in combination with legal expansion targets is necessary to give manufacturers and operators the certainty they need to plan their activities. Nevertheless I am confident that in the medium term the immense offshore wind potential of the Baltic Sea will be recognised and used to a greater extent – also in order to achieve the climate targets set in Paris.

How did the cooperation with the European partners pay off?

It is clear that all former Baltic InteGrid partners are pursuing the same goal: The expansion of renewable energies for a green future! However the approaches to reach the goal are as diverse as our partnership. Each partner has a different national context and different national obstacles. That’s why we had to exchange a lot of ideas and find compromises. Sharing the knowledge about, e.g. approval processes, the procedure for maritime spatial planning or the acceptance of wind energy in the different member states was a great enrichment for all project partners (14 partners from eight countries of the Baltic Sea region took part in the project). Through the project we all have a better understanding of the respective national priority topics and the different national perspectives. This will also be very useful in our future work – nationally and internationally.

Apart from the technical aspects, all project partners have also learnt a lot more about the different cultures within the partnership. For example, I now have a much better understanding of the cultural differences and similarities between the three Baltic states. Of course, it is also nice when such a project results in close cooperation. For example, I am still in regular exchange with one of our Polish partners. 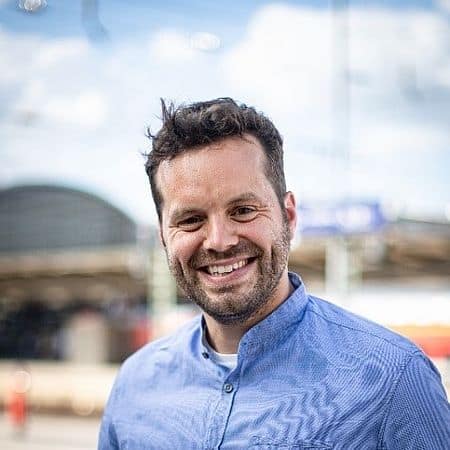 What did you personally like about the work in the Baltic InteGrid project?

The cooperation with the project partners has always been very positive and constructive. When people from so many different countries come together, there is often a very constructive hands-on mentality. This is a working atmosphere that I really like and under which I can work very productively.

The nice little moments where you get to know some of the project partners a little better are also an enrichment. I remember, for example, that I had to wait two hours with a Swedish project partner in Copenhagen at the railway station. We had such a nice conversation that I almost took a train later.

Thilo Krupp is project manager at the OFFSHORE-WINDENERGIE Foundation,

and was a project partner of the Baltic InteGrid project which finalised in 2019. ©50Hertz

What happens after the project is finished?

Of course, we want to build on our experience and results. Therefore we have now founded the “Baltic Offshore Grid Forum” (BOGF). The Baltic Offshore Grid Forum is a network of former Baltic InteGrid project partners and a handful of other actors who consider offshore meshed grids in the Baltic Sea as feasible and cost-effective approach to deploy offshore wind. We therefore want to remain in regular contact. In May 2019, for example, we met at the Baltic Energy Industry Forum conference in Warsaw to discuss the topic of offshore grids. We will also be planning an event for 2020.

It would certainly be nice for our former Baltic InteGrid consortium if we could contribute our knowledge and experience to a follow-up project at some point. I think that with the expertise in the consortium there would be a variety of development opportunities. For example, I could imagine a detailed study on a specific area in the Baltic Sea or a closer look at a sub-theme (e.g. regulation, spatial planning or environmental impact). We will see what the future holds.