One of our Interreg Baltic Sea Region projects, EcoDesign Circle, reached the finals of the RegioStars Awards last year in the category of circular economy. What did the process look like? What did the project like most? And, most importantly, what was the gain for the project? Read the interview below.

EcoDesign Circle reached the finals of RegioStars Awards in 2020 in the category of Circular Economy. How do you recall the application process? What were the steps included?

Conrad Dorer, on behalf of the coordination and management team: In EcoDesign Circle, we equipped design centres and entrepreneurs with practical tools and knowledge in ecodesign to bring the Baltic Sea region closer to a circular economy. In spring 2020, the Interreg Baltic Sea Region Managing Authority/Joint Secretariat encouraged us, the project coordination and management team, to take part in the RegioStars Awards competition.

The application is definitely a bit of work, but at the same time it’s an excellent opportunity to reflect. It’s a bit like creating a press kit: a clear structure, very focused answers, finding the most convincing arguments or examples, and inspiring pictures for externals. What really helped was the detailed  feedback from the Secretariat. We thoroughly revised and sharpened the texts. We discussed the pictures. This was a truly collaborative process! And quite independently of the submission, we now sometimes use the texts as quick reference material, because everything is so condensed here.

What happens after the application? Pretty soon all applicant projects are published according to the categories and everyone can publicly vote for their favourites. It’s a good chance to draw attention to your own project. A few weeks later, a jury selects five finalists in each category. Finalists receive communication support, e.g. “project postcards” or consultancy on a video. At the same time, everyone can publicly vote again for the finalist. Finally, in October, the ceremonial announcement of the winning projects takes place.

And we went thought all the steps and made it to the finals! Our project was selected out of 206 project applications submitted in 2020.

What was the highlight of this competition?

From the buildup of excitement, it is certainly the final event, which was unfortunately online in 2020. We would have liked to have had direct small and long talks with others in the heart of the EU, in Brussels. Instead, we were participated from our living rooms… But even online, the excitement remained.

However, there are other small highlights that are worth mentioning:

Four partners from our project took part in a storytelling training and were enthusiastic about it. Project managers from the Swedish Industrial Design Foundation, the business & marketing consultancy Medina Art from St. Petersburg, the International Design Center Berlin and the German Environment Agency learned about inspiring examples, methods, and tips from the Belgian communication agency Vademecom.

We were also very excited about the internal premiere of our short, animated project film. What would the other partners say about it, who were not involved in the short-term creation process?

And we were delighted that the former Swedish project manager created the animated illustrations for our film script. So the “circle” closes again … Totally in our sense!

After several months after the competition, how do you assess the gains for your project?

The competition had three effects for us: We took another critical look at our own project, our own targets: What did we want to achieve and what did we achieve? What was the initial situation and what has changed in the meantime? What was the original challenge and to what extent have we contributed to its solution? What is really the core of our (achieved) work? And all this has had huge implications for communication: What should we communicate and how.

The second effect is to look more consciously at other initiatives in the field. How have others approached the challenge and solution? How were they positioned? Are there perhaps any areas of overlap? And we saw it all rather in the light of an invitation to “discover”, to “learn” to cooperate instead of “compete”.

In concrete terms, for example, a half-day intensive workshop on storytelling and the task of developing our own short “storytelling film” helped a lot. Often projects (including us) very quickly present results and solutions. But whether on a website or in a short explanatory film, it is about clearly presenting the underlying challenge and what we can offer to our target groups, putting our approaches into a clear and easily understandable context. It was not easy to develop and realize our own film idea in a rather short time (and even in the best summertime). But we came up with something that supports us in our communication and external presentation (and which makes us happy, too)!

As the European Week of Regions and Cities in October 2020 was put into an online format, the opportunity of a direct meeting with representatives of other projects, initiatives, programme-designers but also other interested parties was sadly lost. This certainly is a great opportunity and enrichment, and we hope that other will be able to take it up once again in the coming years.

The third effect is more “a feeling”. We think that we have been contacted more often thanks to the competition. Just recently, in mid-February 2021, we received a request for a short film about our project for the series “Smart Regions” from the TV channel Euronews.

Are there any personal takeaway for you as the project manager of EcoDesign Circle?

To be chosen as a finalist was really surprising for us. We can’t say that this has completely changed our daily project routine. It may sound trivial but it was a confirmation of our cooperation, a recognition of our work and thus a motivation to continue in our way! And to maintain the “treasure”: our good partnership.

It would have been great to receive a short message from the jury though about what they in particular appreciated in a project or what could be worked on from their point of view.

Would you have any tips or pieces of advice for other Interreg projects who would be interested in the competition?

It is a good opportunity to look outside the Baltic Sea region and, at the same time, to become better known out there. There is a much larger audience, a greater visibility involved. It’s the opportunity to promote solutions in a campaign, but also to strengthen your own cohesion.

In the phase of “public voting” it is also a good chance to motivate a wide variety of actors to contact them (again), to inform, to engage. For example, locally in the municipality, in the region, in an institution, in associations… In our opinion, the number of votes is actually secondary – everyone has different circumstances. But there is the great chance for a campaign and to make a mark, and also to receive support, feedback from others.

Take it as fun!

And let yourself be inspired by other projects and their approaches. Get in contact! Through the listed submissions, you are just pushed to projects that have proven to be successful. 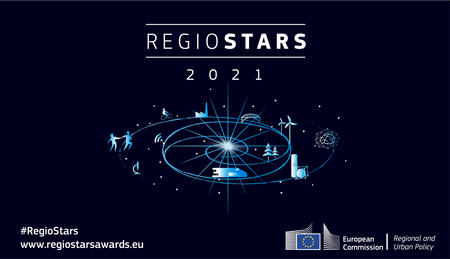 Would you like apply for RegioStars awards? Go here to check the details.